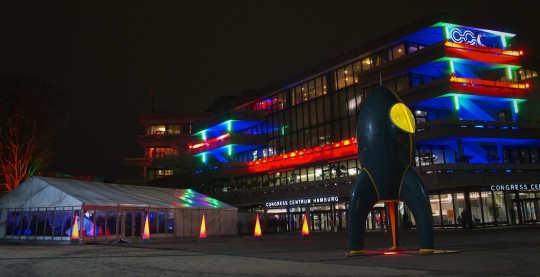 CCH and heart of gold. Picture by anderes_hh on flickr. CC-BY 2.0

Looking back at this year’s Chaos Communication Congress, I first of all want to say thanks to all the organizers and angels who accomplished moving this event to Hamburg and making it happen. Besides having the privilege of sleeping in my own bed during congress, I really think that CCH (Congress Center Hamburg) is a great venue for congress. Not having to worry if it’s possible to get a seat when arriving last-minute to a talk was great. I didn’t feel lost at all and practically ran into someone I know every five minutes. Congress never was solely about the lectures. You can visit workshops, hang out in the lounge, ball pit and bar areas, visit the hardware hacking area or just wander around and look at all the cool stuff that people bring to congress. The new assemblies are advancing the idea of creating such a space of diverse activities and opportunities to meet people and exchange ideas.

Concerning the venue, the one thing I didn’t like was the idea of setting up workshops in noisy and crowded areas. There were quite a few designated rooms for workshops, but there were also workshops taking place at assemblies or the Speakers Corner. I’m still wondering if this was intended as an ironic commentary on the idea of everyone speaking out in a public space. I wanted to attend a workshop on netneutrality at Le Quadrature du Net’s assembly, which was located in the middle of the hackcenter. That did not work for me. But I think there is room enough to designate more quiet areas in the CCH for workshops during 30c3.

Then, of course, there were exhausting discussions about anti-harassment, awareness and creeper cards. I don’t know if I’ll find the time and energy to add to this discussion via this blog, but go and read Philips post (in German). Like Anne mentioned during the policy-meeting: I would be great to have at least one summary of the discussion in English because people really were wondering what’s going on. — Oh, here it is: Ending sexism in hacker culture: A work in progress. For this post, I just wanted to focus on the talks I saw, recommending some of them to watch. Some are already online. For the english speaking audience, there was a live translation of the German talks and you should be able to find downloads and streams with translation a soon.

My favorite talk at 29c3 was given by Eleanor Saitta and Smári McCarthy. “Long live the protocoletariat!” was highly inspiring in terms of thinking how network politics exceeds questions of regulation of internet by thinking about superseding traditional institutions with P2P “protocols”. Examples that were discussed in the talk are Liquid Democracy and Bitcoin. Many many more questions were asked, like “what happens when Liquid Feedback meets pogroms, how a do-ocracy decides to not do something, how not to be governed (which turns out to be quite like how not to be seen), why incomplete politics are useless”. Though I’m not sure if I understood everything correctly and if I agree on an onthological level with their ideas and analysis (especially with regards to power, discourse and capital), this was the most interesting talk in my opinion and I hope you’ll find the time to watch the video.

I also strongly recommend Anne Roth’s talk on the Germanys intelligence agency Verfassungsschutz (Office for the Protection of the Constitution) and Heike Kleffner and Katharina König’s talk about the far-right German terror group NSU (youtube). Kleffner and König focussed on the involvement of agents in NSU’s context and the German nazi-scene. Following the analysis of both talks, one can just say that the Verfassungsschutz has to be closed down as soon as possible. Instead of protecting the constitution, the agency cross-financed German nazi-structures through their “V-Männer”. That’s just … arggggghhhhh!!!

Violet Blue’s “Hackers as a high risk population” is also definitely worth taking a look at. She tried to transfer some of the insights from working with other high risk populations like drug users, sex workers or homeless teens to hackers, applying a harm reduction methodology that acknowledges that certain things people do are quite dangerous, but they’re going to do them anyway.

Jacob Applebaum’s keynote (youtube): While I don’t care too much for him constantly referring to hero-figures, I found it impressive how he managed to connect the fight against the surveillance state of the so-called hacker and information elite with those of everyday marginalized people like is mother who suffers from mental illness. What I took from it was the message that, yes, we already live in a surveillance state, where it’s an ethical decision to not actively support it by for example working in the industries that gain their profits through building it’s technologies. Also, all of us have to check for our coping mechanisms. I’d rephrase this as how we can resist to the surveillance state by also resisting it’s mechanisms of subjectivization and governementality. A critical attitude is about, in Foucault’s words, “the art of not being governed or, better, the art of not being governed like that and at that cost” (from the essay “What is Critique?”). One relatively easy way to support the resistance against surveillance is of course running a tor relay on your computer, using open soft- and hardware and supporting organizations involved in working against surveillance.

Two of the more technical talks I saw and liked where Moritz Simon Geist’s presentation of his mechanical drumcomputer MD-808 (youtube) and Matthew Borgatti’s lightning talk about 3d-printed prototyping of soft robots. Other talks I saw dealt mostly with network politics issues and I went to some of the traditional talks like Fnord Jahresrückblick and Security Nightmares as well. They were business as usual. A bit amusing and insightful, but not exciting.

Talks that I still need to watch include Anatol Stefanowitsch’s presentation on language and discrimination and the one on the INDECT project by a guy called Ben (who I think I’ve met on day 4, but I was in a hurry then and did not really listen. Sorry for that!). If you like, please add your favorite talks in the comments.